I know it may be hard to believe, but I actually think I am going to get both of my intended crafts done this week! Hopefully I will be finishing up number two before dinner.

I know that this is not new and I must be the last person to do it, but I decided that I needed to cover some ugly boxes in fabric. See, I have been storing momentos for years in this ugly box: 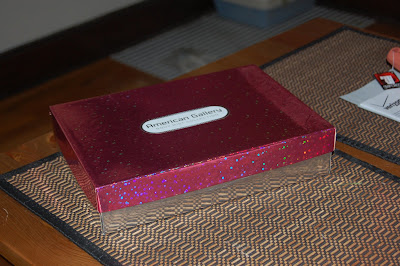 And it needed a new life. It was dirty and kind of falling in, but behold! it has new life! I just never knew how to easily attach the fabric before and after looking through Your Space, I was inspired and off I went to Joanns. I ended up getting some Heatnbond iron-on adhesive and let me just tell you, it is fabulous! So easy to use and now my box looks like this: 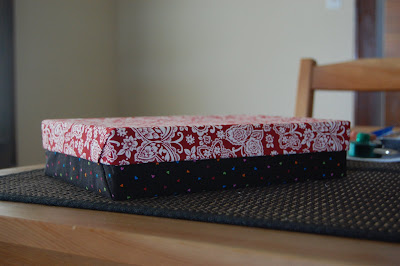 Weird fabric choices, absolutely, but I wanted to use what I had and I kinda like it. And it is still much prettier than it was before. Oh the possiblities! The things I can cover in fabric with this stuff! Man, I am so excited haha. Anyway, that is my first project for this week and maybe tomorrow I will put the other one up.
Posted by Cassie at 4:03 PM No comments:

Alright, it has officially been forever since I posted any of my crafts. Tax season just kinda ate my life and I didn't get a whole lot done or have the time and energy to post about it. But, that is all over now and I am settling into a summer of crafts :) Hopefully there are a number of things I will get done this summer, but before I start on all that (the two projects already lined up for this week) I have two very important projects that I did manage to get done this spring.


The first is a set of curtains. We moved to a new place the end of February and I really wanted to make some curtains for the bedroom. They are huge and block a lot of light and it is delightful! I used 3 fabrics, a stripe one for the front, a plain brown for the back, and a blue and white design across the bottom that goes all the way around. I kind of made up the design from a number of things I had seen and just threw it together and I am really happy with them. I opted for tabs on the top and, while not the easiest hanging solution, I like the way they look although next time I think I would make them a little wider. The picture is a bit blurry, but you get the idea. 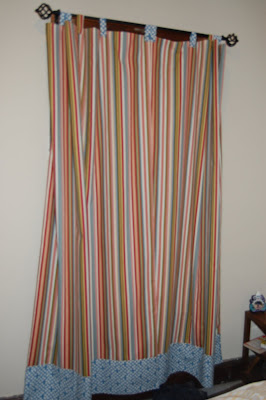 The other project is what I consider my first real quilt! Mostly because it involved actual quilting ha! Anyway, for my cousins baby girl, I thought it would make a nice blanket for her to play on the floor using an old snoopy t-shirt (they wanted a snoopy theme) as the center piece and I found a pattern that is basically waves of triangles. Let me start by saying that as cute as it turned out, I will definitley limit my work with triangles in the future, I hate them. I took a pattern for a single quilt square, and just enlarged everything so that it ended up about 40" x 40"....I say about because well....I'm not even sure how close it is. Have I mentioned I have a problem with measurements and exactness?? Well anyway, I am really happy with the result. My quilting was very simple and I just stiched in the seams to hold it together through washing. Good thing too since the batting did bunch a bit when I washed it. I also decided not to pre-wash the batting so it would get a slightly puckered look (I used 80% cotton batting) and I like it a lot. I thought it was a good start. 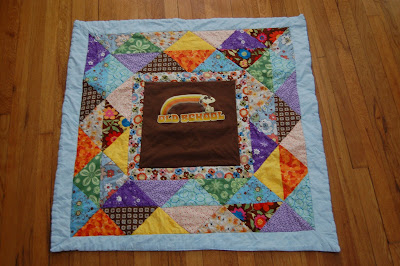 I have two other small quilts that I would like to make sometime this year, but I haven't decided exactly when or for whom said quilts will be made for. They also require minimal quilting, but I figure starting basic and small will help build my confidence up in case I ever get crazy. My project for this week has me using piping for the first time so hopefully that will go well. Hopefully there will be one, if not two, finished projects to post this week or early next week. I also have a wedding craft or two that I finished. Alright, that's enough out of me for now, but I promise I'll be back and it won't take 4 months.

Posted by Cassie at 3:14 PM No comments: