I don't know if anyone has noticed, but I really like making little kid things. They are small and consequently quick and very rewarding. I try not to make too many complicated things for kids, especially clothes since I know they will fit for only a short amount of time. A while back I saw this 15-minute dress pattern and fell in love. It is just so super cute and I figured it would be perfect for my cousins daughter (the one I made the various other things for). She will be two in a month and this little dress would grow with her into a shirt if she wanted (although it might be too big for now). Her parents are also very much the bandana types :) 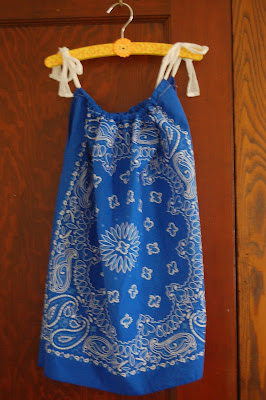 It is a really simple dress. You pretty much take two bandanas and sew up the sides leaving an opening for the arms and a little extra for a ribbon casing. I used a silk ribbon actually that I found in the jewelry section at a.c. moore because it was just so soft and I think it ended up looking great! I love using things where the edges are already finished so no worries about hemming or anything. I used a nice bright blue bandana with white ink which I think will look just wonderful on her very blonde little self.
Posted by Cassie at 10:45 AM No comments:

This is it. The last thing that I had made before the baby was born. It makes my 'quilts completed this year' total 3 (and if I'm lucky, that will be at least 6 by the end of this year). And as my husband said, it may be the best one yet! It came out just about perfectly, partly thanks to a simple pattern and limited piecing.

I first saw this quilt in Bend the Rules Sewing, which I know I've mentioned before as I have made quite a few things from it. I had this perfect stash of 1/3 yards of pink and brown fabric that I had seen at a local quilt shop and loved so I got it for the stash, having no idea what I would actually make with it. It was perfect. As usual, I tweaked the patterns to fit my needs, making the strips patterned with solid interruptions instead of the other way around, and adding some strips to make the blanket a bit longer and balance it out. I also decided to do a nice little pieced strip on the back and honestly, I almost like the back more than the front! Lesson: polka dots are a great back and an even better binding. The quilting is simple straight line quilting at random intervals on the strips, and it is actually close to straight most of the time, quite an accomplishment for me. The finished size is 39" x 43" and it is really a great floor blanket. The cat really loves to burrow under it and play. And believe it or not, although it is a girly blanket, I made it before we had any idea whether we were having a girl or boy and it just worked out, but I wouldn't say this was made for the baby. So here it is, my best quilt yet according to some: 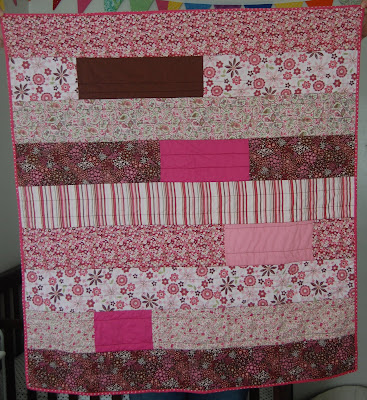 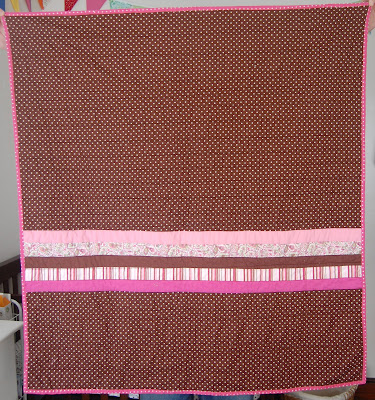 I love that the sun came out between the front and back pictures so the lighting is different haha. I think the colors look a bit better in person, but you get the idea.

I already have a bunch of other things done to post when I get the time and I am working on a bunch more. There is a sneak peek coming as well!! And at some point, I am going to sit down and really write out where I want my crafting to go and work out some goals for the next year or so. So far every time I cross something off my to-do list, something else pops into my head that I must make and I end up adding more than I accomplished. That's normal, right??
Posted by Cassie at 12:28 PM No comments:

So I don't know if I've mentioned our use of cloth diapers, but either way I am now. We use cloth diapers and we love them. And she loves them; no rashes like the few times we have had to use disposables and super soft, not to mention they are just about the cutest thing ever :) Anyway, really it would be silly to use cloth diapers and still use disposable wipes. I mean as far as waste goes, do you know how many wipes a baby can go through in a day?!?!?! We used them when we were visiting our families and it just felt so...wasteful.

So when we were getting our cloth diaper start-up stuff, we got a few different kinds of wipes to try: bamboo terry cloth, cotton flannel, and....I don't recall what the others are made of, but it is like a terry on one side and more velourish on the other. In any case, the flannel is too thin and the bamboo terry are the best but also started coming apart in the dryer (they were supposed to be hung to dry, who has time for that??) so I decided to make some to help our stash. I went on etsy.com and found some organic bamboo terry cloth with loops on just one side and bought a yard of that. It turned out to be a pretty stretchy knit. I got the one sided because I don't have a serger so I knew I would have to finish the edges anyway and figured I could back it with something else. I decided to use a used flannel receiving blanket we had been given (we have about a bazillion) for the other side.

I used a straight stitch since I didn't want it to stretch since only one of the fabrics is stretchy and used a walking foot to keep the layers together nicely (best.decision.ever.). I just sewed 7" squares right sides together, flipped right side out and topstitched all the way around. They came out perfectly. We love them and actually they are now our go-to wipe. I only made 10 of them to start but once some of the others wear down I will probably be replacing them. It was pretty cheap considering how many wipes I can get out of the yard I purchased. They wash wonderfully and so far, for the weeks we have been using them, stay soft and clean well. 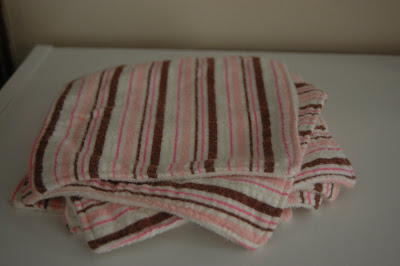 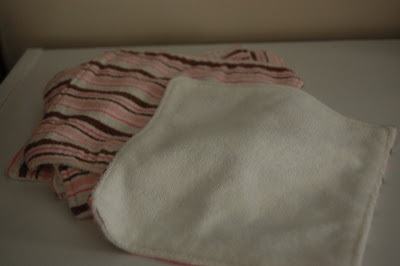 So there you have it, aside from hemmed yoga pants (not very impressive really) this is my other very successful knit fabric project. We'll see where it goes next, but let me say, I have learned to love my walking foot, mostly for things other than quilting so far. I have actually been able to do a fair amount of sewing so far and have a handful of complete things crossed off my list, which feels great. And I only have one more project that I finished before giving birth and then we start in on the new stuff :) I have a whole lot to get done in the next 3.5 months!!
Posted by Cassie at 10:43 AM No comments:

Let's talk about knits. Knit fabrics. Knit fabrics and I have a....developing relationship. It's funny, the first thing I ever sewed was a t-shirt blanket. The entire middle of the blanket was knit t-shirts and man, it was tough. I had no idea what I was doing and just kinda made it up as I went along. The result was a lot of frustration at the stretchy fabric (no one told me to put interfacing on or anything to make it behave) and a vow not to sew with it again. Well of course that didn't last, but it was over 2 years before I tried anything with knit fabric again, and that was the newborn gown. I figured if it was smaller it would be easier, plus I had been sewing for a while and figured I could handle it. I had a pattern and everything! And easier it was, but still not great. Of course that could have been because I don't like sewing clothes, sleeves in particular. So 7 months later, I decided to try again, but this time I did a simple applique on a onsie and some baby legs. I figured if the patterns got simpler it would be easier. Ha! How little I know! Neither project came out particularly well, but let's take these one at a time, shall we?

First, a baby onsie. I decided my baby would need something cute to wear for 4th of July. As it turned out, it didn't matter since 1.) we spent the holiday in the hospital and 2.) she was pretty small so the 0-3 month onsie I decorated would have been way too big anyway. Ah well, I guess that makes it okay that it didn't come out well. It's not too bad I suppose, but I really should have stabilized the fabric and since I didn't, the zig's are missing some zag. It just wouldn't catch in the fabric very well at all. Enough to stay on, especially with the heat and bond I used, but really, not great. (the pictures actually make it look pretty good, but I promise up close there are many many missed stitches). 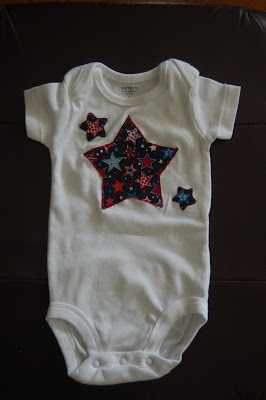 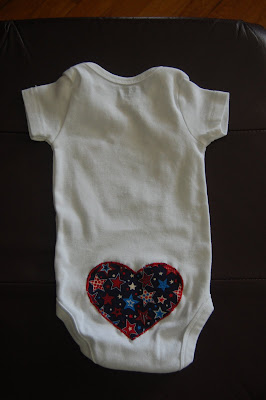 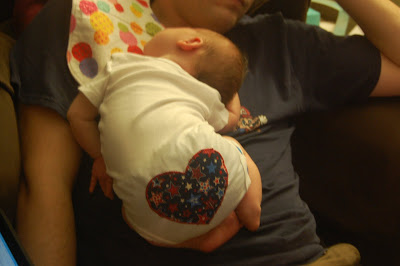 Second I wanted to take some socks and turn them into a version of baby legs. What are baby legs? Well they are the cutest most adorablest baby leg warmers which are infinitely more practical than tights and make a diaper change a breeze. It is a simple pattern, but let me tell you, it did not go well. I could not get the stupid fabric to cooperate! There are pieces sticking out every which way making it look sloppy. *sigh* I'll try again with my new found knowledge and if that doesn't work, I'm buying some. 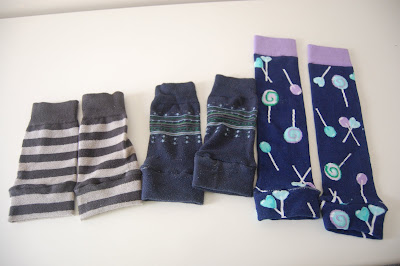 But, things have gotten better since my insanity of June. First, I now have the book Sew U Home Stretch which deals with sewing knits and gives helpful information even if you don't have serger (I do not). It has been great and helped me complete my first knit fabric project that I would consider successful, yoga pants that I hemmed to capris. Second, through the book and yoga pants I discovered the perfect stitch on my sewing machine and also that despite the fact that my instruction manual says no walking foot with a zigzag stitch, it can be done and it makes things much much easier.

That said, I have another project that deserves its own post that used a knit fabric so that will be coming up. Although actually I didn't use the zigzag for that one....hm, oh well. Anyway, the point is, I am getting there and I have high hopes for my relationship with knits becoming a good one.
Posted by Cassie at 2:39 PM No comments: