The moment everyone has been waiting for. The Little Folks quilt is done!!!

When I started this blog I had never quilted anything and hadn't sewn much. I had just moved to a new place where I knew no one, couldn't find a job, and was broke. I needed something to fill the time. Up until around that point, I had been primarily knitting, which I still love but is pretty hard on the hands and lacks....the same instant gratification of sewing. I started really because I figured I could make instead of buy a lot of things. Then my cousin was having a baby, and I figured I could sew a blanket for the baby. So I did, and even though it was very very far from perfect, I kinda liked it. A lot.

And then, I really discovered quilting blogs. That opened up a whole world of possibilities. In particular, I discovered Anna Maria Horner, both her blog and her fabrics. And I fell in love. This was while Good Folks was really popular, but before I could scrounge up enough money to buy it, it was pretty much gone. I was actually really sad about it.

And then came little folks. Beautiful, yes, but voile so I was hesitant. I am not exactly an experienced quilter so I was a bit scared. And being voile, the colors weren't quite as vibrant due to the sheerness so i was initially unsure of how much I would like it, but it turns out I seriously love it. I knew exactly what I wanted to do with it: log cabins! I had never made a log cabin block before, but this post convinced me. It was also one of the main reasons I was so stinking obsessed with good folks. I looked into quilting with voile and found a bunch of people making beautiful quilts with this line. In June I decided to just go for it and I ordered 2 fat quarter bundles in different colorways. This voile is amazing. I was still scared to quilt with it, but I shouldn't have been. It's just awesome, this stuff just feels amazing, so soft and silky.

I was also about to have a baby. Like any day. And I didn't want to start sewing and then have to stop for an undetermined amount of time. So I just cut it out and it sat in a pile screaming at me to be made into a pretty quilt. I decided on 12" blocks, with a 4" center and 2" strips. The pattens are laid out randomly, and I just love it. The back is marine from the pastry line, with a double strip of squares I had left over, and it is bound in pastry line voile in magenta . Using warm and white batting really helped keep the colors nice and bright. I did straight line quilting as usual, and did a big grid following all the seams. It works, but it is probably a little much. Thankfully it doesn't really mess with the lovely drape, the fabric just doesn't seem to get stiff. It is all washed and dried and crinkly and lovely. It is such a lightweight blanket, perfect for cool summer evenings of snuggles. I just don't want to share it or let anyone else use it haha.

And now a couple of pictures. The sun washes out the colors some, but that's okay. I would have more detail shots but the bees were out in force and I hate bees. 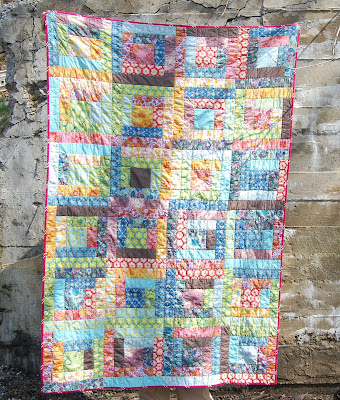 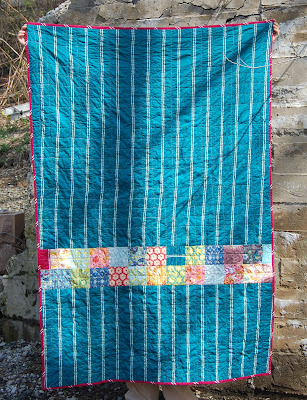 It is definitely a happy blanket. And in it I can see a lot of improvement in my piecing and quilting, and that is always a good thing :)
Posted by Cassie at 6:17 PM No comments:

Okay, first of all, I'm just going to go ahead and say it: mug rug sounds dirty.

Now that we got that out of the way, they are apparently all the rage haha. When I was trying to figure out 1. what to do with my scraps from my little folks quilt and 2. what to make for a friend who was promised something crafty, I thought a little mug rug would be perfect. It would use scraps and give me a nice quilt sandwich to practice my quilting on for the big one. Consequently, I made it a square, roughly 9" I believe, and just did a slightly smaller version of the log cabin blocks from the quilt. She happens to drink a lot of coffee and this is just the perfect size for a mug and a scone (or something equally delicious). It is double sided because, well why not? 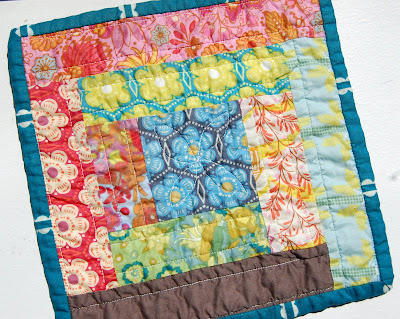 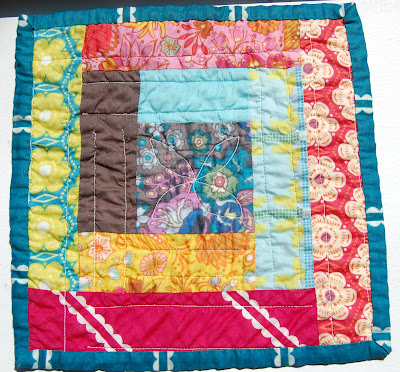 It was a little difficult trying to line up the seams front and back, but I made it work. I tried some straight line quilting in each of the logs and a free motion flower thing in the center. It worked alright, the flower came out better than I expected, but the lines were a bit of a problem since the front and back were going different directions....I didn't think that through when I made them. It turned out I didn't like the detached lines much anyway and settled on a different quilting design for the big quilt, but it was good to find it out this way. I really loved quilting the voile actually, but more gushing on that when the big one is done. I am so close! Hopefully in the next couple days it will be finished being bound and get washed and ready for some couch snuggling.
Posted by Cassie at 11:01 AM No comments:

I am so close to done work I can taste it. One more full day of work and then 3 days of wrap up stuff and I am free! Let me tell you, I just can't wait. The house is sadly neglected and the list of things I want to do/make is just sky high, so I can't wait to get going on that. Soon, very soon.

Anyhoo, I did learn a new skill during this work season. I can crochet!! Well kinda, anyway. I have a somewhat larger crochet project in the works, but I don't exactly know when that will be done. I did, however, find something super cute that I wanted to make while perusing pinterest one day (seriously, obsessed). It is a knotted headband and really, it is a crocheted chain. 2 technically. I am pretty sure my mom taught me how to make a chain ages ago, but my new crochet lessons refreshed it. My biggest roadblock in making this was that, believe it or not, I didn't own a hot glue gun haha. Luckily, my office happens to be 2 doors down from an A.C. Moore so that was easily remedied :) And of course once I got one done, I just had to make a second one for a friend (she loves hers too in case you were wondering). Mine came out a bit thinner than the pattern since I used what I already had. And since I was using a different size hook and weight yarn, I just read through the pattern and eyeballed the length I needed. It didn't matter if it was too long since it got cut down anyway. I like the thinner look though and I used some of my cotlin yarn scraps, and I just love that yarn. 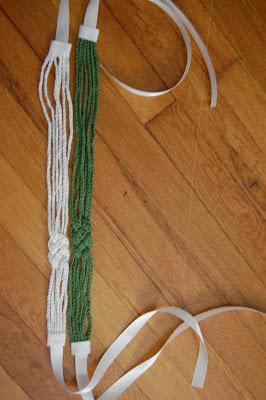 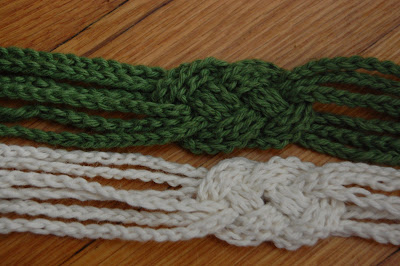 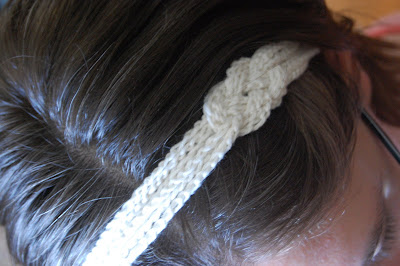 It was super quick, simple project and I just love it. I want to wear it all the time. It is not perfect, I had some trouble perfecting the hot gluing of the ends, but it works.

And now to go enjoy my day off...even though I still have to run to the office. 4 more days!
Posted by Cassie at 10:14 AM No comments: 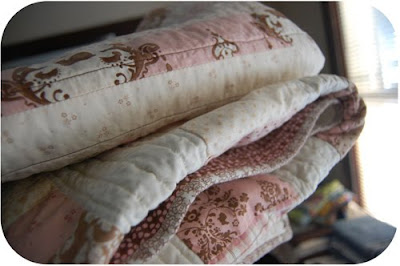 A very dear lady at work became a grandmom last week. A couple of weeks ago someone announced they would be collecting money for a gift for her daughter and I immediately thought, hey, we could make her a quilt and called my quilting partner in crime. Was this an entirely sane thing to do? No, not really. Getting things done on a deadline while working right now, not so easy, but whatever. Will it be worth it to know that this baby has such beautiful blankets to lounge on? Totally.

Originally, we were going to go to Joanns, pick out some fabrics and make a strip quilt similar to my pink and brown one. Simple enough. Then, I made the mistake of looking at fabric online to get ideas. In my searching, I found the Lily and Will by Bunny Hill Designs in pink and fell in love. Pink and brown? Yes please! And bunnies too! A jelly roll seemed just the thing to make a pretty strip quilt and have a nice variety of fabrics. But surely we could get two quilts out of a jelly roll! And so the plotting continued. I had been wanting to make another stacked coins quilt ever since I saw one with different (read: better) quilting, and this seemed just the opportunity. 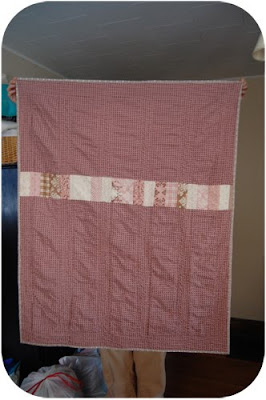 The jelly roll came with 40 strips and we used 17 to make the stacked coins quilt and the other 23 for the strip quilt. I already had the ivory for the sashing and enough batting so we just needed backing and binding which we decided would be opposite for each. I made the stacked coins quilt, quilted both and bound them. All straight line quilting, across each strip about 1/2" from the bottom for the one quilt, and the other has straight lines down the sashing. It took 3 pretty intense nights to get them bound, but they are now finished, washed and wonderful. 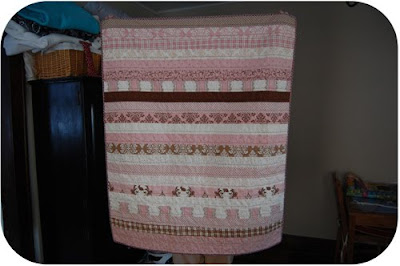 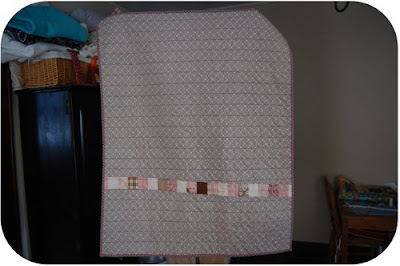 We love the way they came out and just can't wait to give them. (if only the pictures did them justice....stupid lack of sunny days...). Hopefully they will be loved and enjoyed. I actually love them so much I would be happy to keep them, but I am pretty sure I have enough quilts and with so many more planned, I can handle parting with these two :)

So that crosses those off my list. Actually I had to add them to my list just so I could cross them off since it was really just me getting side tracked. I am still trucking away at some other things. Believe it or not, I am actually 1/4 of the way done quilting my little folks quilt. I love it more with every step of the process. More on that later.
Posted by Cassie at 9:06 PM No comments: