Well, I certainly can't top my two quilt finishes last week, but I am moving right along over here, getting as much done as I can. We are now confirmed to be moving within the next month, and while not far (only a few blocks away really), that means I will have a whole bunch of new home stuff to make. Not to mention a lot of junk to clear out and organize and pack. Which is obviously besides the {sewing} point.

So anyway, this week my big hooray is that I am all caught up on my penny sampler blocks! But only for a bit since I will have new blocks to make quite soon. Still, it's something. I finished 10 blocks this week to catch up. It was intense, mistakes were made, some were fixed, some were ignored; either way, I am where I want to be. This picture is the whole thing together so far. More on these later. 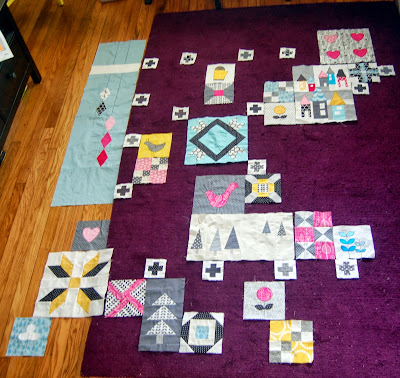 This weekend will hopefully see finished panties, hoodies, and little stuffed bunnies. No new pictures at this point since it is all in pretty much the same state it was last week.  The crochet blanket is also sadly neglected since I got sucked into a book, but I'll get back to it soon hopefully. Then I guess I need to figure out halloween costumes....I don't know, we'll see. Hope everyone is having a good week!