Yes, I know, more pillow business, I have a pillow problem, but I finally decided last week to make a pillow for our kitty to try and make him more comfortable and give him a space of his own. Of course he is absolutely not interested and would rather attack the pillow then sleep on it, but that's okay. I made it to fit in his new carrier to make it a little more homey for him and so maybe he would hate it less, but I doubt it will work. Anyway, I actually cut up a pillow case that we had (a sock monky pattern that seemed like a good idea at the time but is actually really creepy to sleep on so it was perfect to cut up for the cat) and remade it into a pillow with an envelope back so that I could also make a pillow form and stuff it and put it inside so the cover is removable and thus washable. I made the pillow form out of a plain cotton flannel and stuffed it with leftover eco-friendly stuffing from the ugly bear. Then I cut up the pillow case so that I could use the ends as the place in the back where the case overlaps and I wouldn't have to hem or anything because they would already be so nicely finished which worked out beautifully :) I opted for the envelope closure so that I wouldn't have to deal with zippers or ties (which he would just attack) and I am incredibly happy with the choice. In fact I think I may make all my future pillows close that way! I guess we'll see once I have space for more pillows haha. 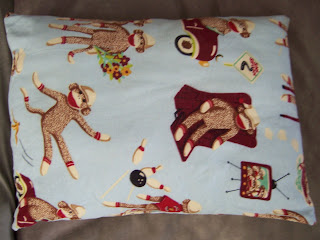 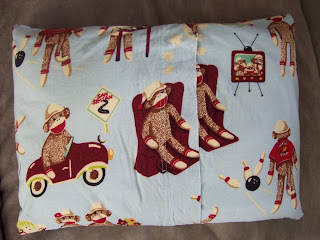