I made a sweater!!

I have never been one to make clothes really, although I feel somewhat differently about childrens clothes. The whole idea of fit and making sure things are accurate....well it just doesn't really appeal to me, possibly because every time I have tried, it has ended badly. As far as knitting a sweater, I just wasn't interested a project that would take forever and probably not even fit.

This past fall, I found a project to change all that. My mother-in-law had a short subscription to Burda magazine, and in the fall issue was a knit sweater. It was a nice chunky knit, using size 17 needles and a super bulky yarn and was knit in one piece from one arm to the other. It is a simple cardigan style and I wanted to make to wear around the house. I admit, I did not check my gauge because...well I never do and I figured it really didn't matter since I am not wearing it out of the house. I started it over the holidays and really had wanted it done by the new year, but obviously that didn't happen that way. Still, it was a very quick knit. 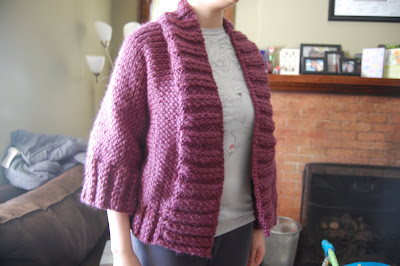 I actually chose the color (Lion Brand Yarn, Wool-Ease Thick & Quick in Fig) because I had a ball left over from a previous project. It worked pretty well. The problem with the pattern is that it is all done by measurement, not by rows, and measuring is difficult when you are using a thick knit that is heavy and not very tight. So despite my best efforts, it is uneven. Quite uneven actually although I can generally manipulate it so that it isn't quite as bad. Ah well, I tried. And my dislike for making clothes is confirmed. Until I find something that makes me try again :) Now, to add buttons or not.... 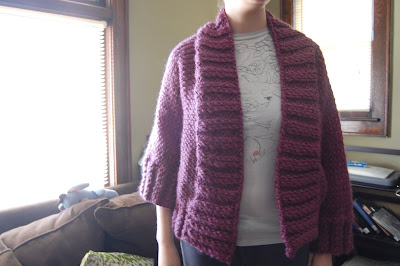 In other news, I am waiting to see what happens with work, but I may be crafting/posting less for a while. We shall see how the week plays out, but I may be a busy bee until the end of April. More on that as it develops.
Posted by Cassie at 11:31 AM