So, Monday again. And I am definitely still in a bit of a food coma from our fall celebrations. It was delicious and a great way to usher in a new season. And guess what?!?! I finally got some pictures of my little love bug in her new jacket! They aren't great, but I take what I can get. After making her jacket last year, I just couldn't resist making another this year.

It took me a while to find a pattern I liked. I used simplicity 2534, view A and it came out pretty well, but far from perfect. 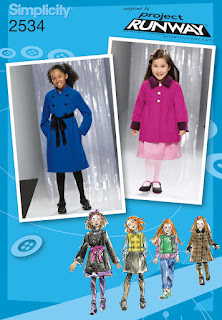 Let me start by saying that it was one of the more complicated things I think I've made. It had quite a few pieces and was a bit more....I don't know, professional?, then what I am used to. I tend to make sure I pick nice simple things, but I just grabbed this and ran with it. I used a gray suiting fabric for the outer and a quilting cotton for the lining, and I found the suiting a bit difficult to work with and I don't think it lays particularly nice in the finished jacket. I think I might have liked a heavier coat a bit better. Oh, and I made her a size 3 which was the smallest size. It is totally big on her as she has just started moving into 3T clothes, but it will work and maybe even for the spring and if I am super lucky, next fall. I don't know though, she is a little weed and pretty much wore her 2T clothes for 3-4 months before outgrowing them in length. 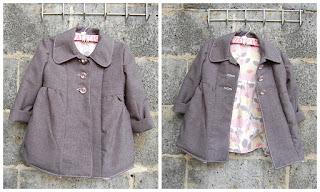 Anyway, the biggest trouble spots for me were the finishing instructions. It took me forever to figure out how to attach the lining at the sleeve and finally I couldn't get the bottom hemmed right so I just folded it up and topstitched the entire thing. Which worked well and helped control the suiting fabric a bit and I really like the look. Of course I didn't notice until it was completely done that I had a bit of a gathering issue on the one side which is pretty obvious, but oh well. She helped me pick the buttons (naturally) so she was pretty excited about those. 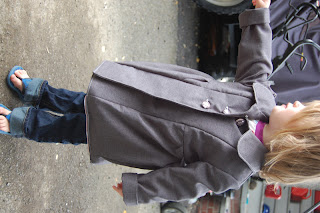 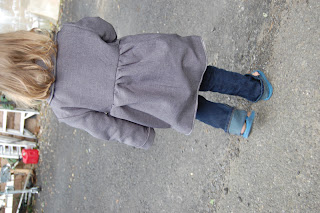 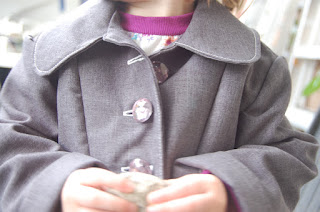 It does have pockets too which is nice, but they are in kind of an awkward spot for her so I'm not sure she'll use them. 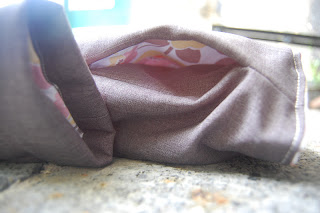 In conclusion, it is done and it is cute and it will work. And I don't know if I'll make another next year....if I do it will probably be a simpler pattern. I think for now I'll stick to much more basic clothing.

And now, I need to stop avoiding string piecing and push through a few more blocks. I think this tragic kingdom quilt is going to end up smaller than I planned. I am running low on scraps, but it should be a decent baby size. I hope. You would think after 2 days break from them I would be ready for more, but I am pretty tired of them. I don't know how people make large spiderweb quilts!
Posted by Cassie at 8:33 AM