Finally, after much waiting, I am posting the ragged squares quilt that I started (and completed) so many months ago! I couldn't talk much about it since it was a christmas gift for my sister, and it was such torture since it was done in October. It actually came together really quickly, but that might have just been because I was so excited to get it done that I was quite motivated. I decided on this one to not pre-wash any of the fabrics so that they would pucker and fray nicely and it worked great. It is all black and white fabrics with some lime green on the back squares and the binding. It was between lime green and hot pink honestly, and green is much more sister :) The tutorial is here and I just....expanded it. I kept the squares the same sizes because I liked the proportions, but just made it basically full sized. It is 8 squares x 9 squares but I think it did end up shrinking quite a bit during the washing. The back ended up with a bit more in the way of detailing than I had originally intended (ya know, since I apparently can't measure fabric) but I love the way it came out. The quilting was kinda difficult since it was a whole lot of squares, but it was worth it, and the result is great. It was definitely the largest blanket I've made so far, and I think for now I'll stick to smaller ones (although really my scrap blanket, an upcoming post, got a little bigger than I meant for it to haha).

So here is the front: 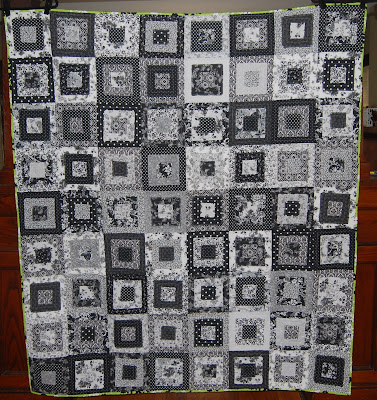 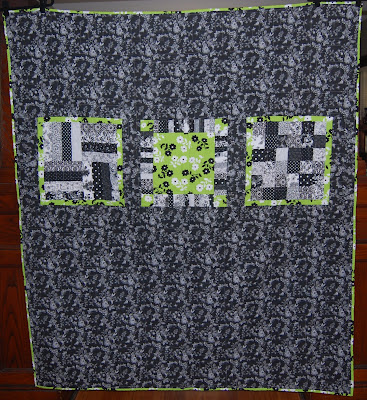 And some detail shots for good measure: 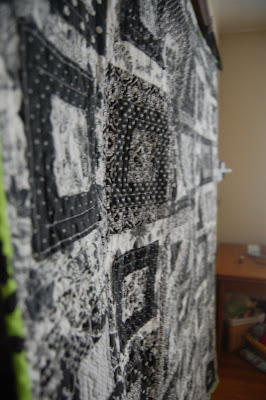 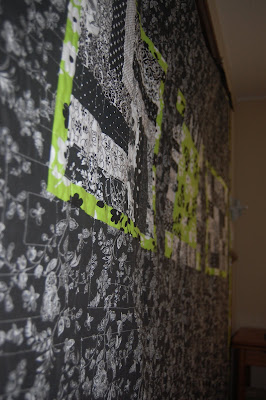 I love it, and my sister tells me she does too :) and now I think I'll go work on the matching pillow that I am just now getting around to making with the leftover scraps!
Posted by Cassie at 12:55 PM