Good Morning! With all this traveling, this week got away from me. So since I have worked on absolutely nothing sewing related in the past week, I am going to skip the wip wednesday link-up and talk about something else instead. That something else: yarn. Knitting really I guess. I don't know, it just felt like time for an update.

Part one of the update is about the afghan. You remember the one? The one I swore I was going to finish because I found it and it was taking up space. Well I made a handful more blocks and just couldn't take it anymore. It has a new home now with my dad who can do with it as he pleases. It was stressing me out just looking at it hanging around and I wasn't enjoying making the blocks anymore. So that is gone and off the list. Not exactly how I was hoping for it to end, but it's nice not to have to worry about it anymore.

I have been making slow progress on the other thing on my list which is a cowl for my sister. 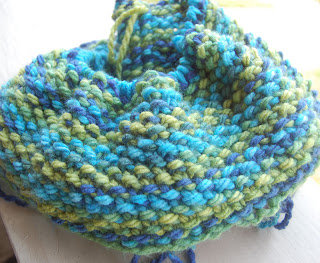 It is looking good so far and I am just past halfway done I think. I am just going until I run out of yarn so we'll see how wide it gets. It is looking good though and I am kind of excited to see it finished. Not that there is a really hurry I guess, since it doesn't do much good when it is so stinking hot out.

I have also decided that I would like to try making a pair of socks. I had been debating trying something on smaller needles ever since one of the ladies at the yarn shop said that her hands hurt less when she used smaller needles. The deal was sealed when I found a yarn I love. I didn't buy it yet, but my dad let me have some pretty yarn he had to test the waters. And he is lending me his book about knitting two pairs at once on circular needles. 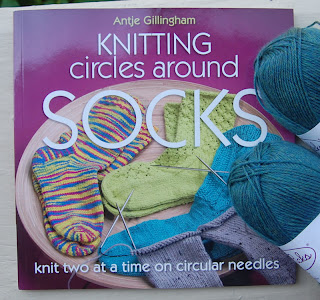 I figured my biggest problem would be not wanting to make the second sock so hopefully this will take care of that. I am hoping to get some needles and get to work soon, once I finish the cowl. So we'll see how I feel about sock knitting. I hear it is very portable and relaxing so I have high hopes. And hopefully it doesn't take me too long to get the hang of it. I picked a super simple pattern to start with. I really hope I enjoy it!

I also want to start a blanket but I don't think I'll be doing that until fall so I'll deal with that then. And that is my knitting update for now. It's not that impressive, I know, but I'm going to blame the heat. Now I need to go get some sewing done!
Posted by Cassie at 8:37 AM