Happy Monday! I think. 2 weeks until moving day, but at least I have one more thing crossed off my list. This weekend I finished the bag for my dad and it came out really well. It took longer than I was hoping, but at least it is done.

I used the getaway duffle bag pattern again, and like the last one, I quilted it. This time I used a layer of felt for the inner layer and it worked out well. I was a little worried about it, but it seems to have a good deal of structure. I decided not to use the piping this time, which made it a bit easier and I thought worked better with the plaid, although the edges aren't quite as nice. I also added a snap for the outer pocket I added, which I think was a good call. It does get a little easier with each one I make and I am happier with the way they turn out. Even machine stitching in the lining went pretty well!I used a black fabric with brown dots for the lining. I originally bought it to use for my farmers wife because I thought the dots were gray, but since they weren't, it has been sitting around for a while now. 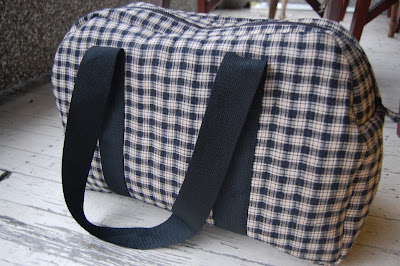 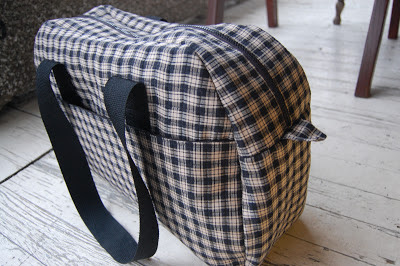 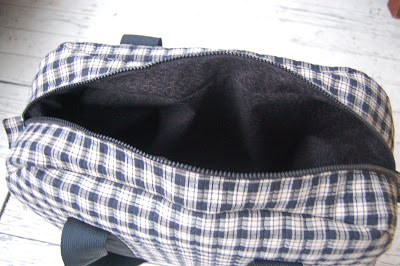 So at least that is done and I have started cutting for my mom's bag and I am over halfway done binding the feathers quilt. After that it is pretty much just small stuff. I can't believe how the time is flying. I have way too much to do. And I totally bought myself the weekender bag pattern so that is on my list for the new year. Along with a bazillion other things. I also can't decide which hand work projects to have ready for moving time. I really want to do my kawaii winter wonderland cross stitch, but I also have my hexies and a bunch of things to knit and I am trying not to start too many at once since then they will never get finished. But enough about all that for now. I am crossing my fingers that by Wednesday I have the panels for my mom's bag all ready and can begin construction!
Posted by Cassie at 8:21 AM