Oh Monday, why do you always sneak up on me? Sometimes, the weekends just fly by. And this past weekend, while good, involved absolutely no sewing time. I am actually suffering from a bit of project overload right now, but I am hoping today to get enough done today so I don't feel so overwhelmed. We'll see.

Anyway, on to the point. I finished my Tova tunic top last week!! Not only did I finish it, but I then wore in in public! And I wasn't even ashamed!!! This is huge for me since the only other thing I've really made for me to wear (a dress), well I don't really want to talk about it, and it has since been turned into a bag for my yoga mat. 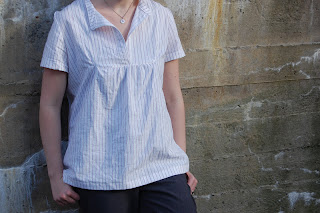 I used the Tova pattern and the directions were nice and clear, although having Kerry's Sew-Along to help made it even easier. I used a fairly lightweight quilting cotton from Joann's because I wanted to see how this was going to go before breaking out the good stuff. So it's a bit stiffer because of that. I do want to make another one in voile so I am interested to see the difference. I shortened the sleeves since even though I love 3/4 length sleeves, I though it would be a bit much in this fabric. 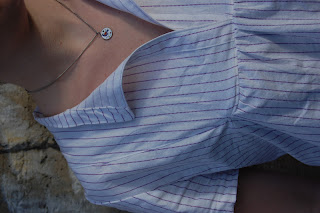 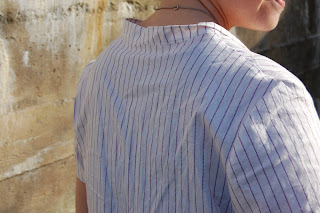 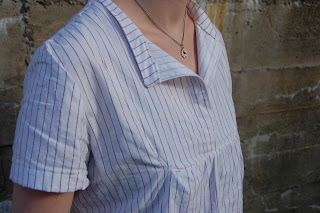 I actually had a harder time with it then I thought I would. The front inset gave me all kinds of trouble (you can see some of the puckering in that last picture) and at the end the collar was a bit difficult, which is my own fault for not hand sewing it down on the back before topstitching so I didn't catch it all and there were some gaps even though I used tons of pins. I tried to go back and fix them, but after I washed it I ended up with a hole where the collar attaches, so I was pretty bummed about that. I guess in the grand scheme of things it wasn't too bad, but I think for the most part I'll be sticking with quilts/bags/baby and toddler stuff. I don't mind making clothes for little ones, but for me, not so much. I will still make a voile version one of these days though I think because it really is a super nice shirt.
Posted by Cassie at 8:24 AM