I finally have my tragic kingdom quilt done, washed and ready to show! I feel like it took an awfully long time, but in any case, it is done now. It finished at about 31"x42" once it was washed, so kinda small but not too bad. 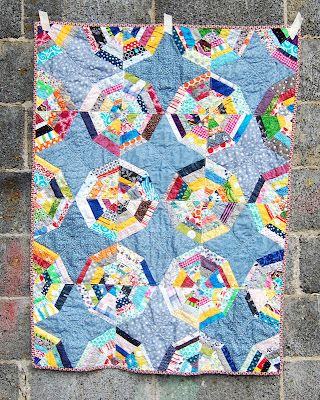 I had been wanting to make a spiderweb quilt for ages. Seriously, it was one of the first things I pinned I think. I don't know what pushed me into actually doing it, but I think it was the idea of using all the different blue backgrounds that I just couldn't get out of my head. It used up a lot of scraps (although somehow I still seem to have tons) and I love the way these blocks look together. I trimmed them down to 11.5" when I was done because they were a little wonky, but they worked out just fine. I just love looking at all the little scraps from so many of the things I have made and it was really nice to not put too much though into it as I was making it. The blue fabrics are mostly ones given to me that had been sitting in grandmothers attics and such, so it was nice to use them for something. 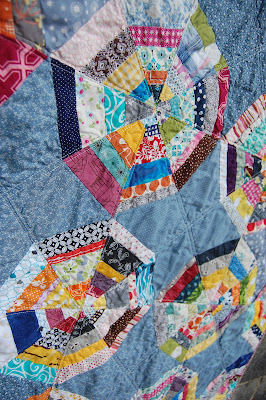 The advantage of it coming out smaller than I intended, was that I only needed one piece for the backing. I used a print I already had sitting around. It is busy, but I think that goes with the scrappy front. The binding is a binding leftover from a quilt made ages ago. Clearly I made too much binding, but I guess it worked out in the end since I didn't have to make any for this :) The quilting is straight lines on either side of the seams and I love it. I had wanted to do some free motion quilting, but the centers were so wonky that I knew it would just end with frustration and puckers, so I went with straight lines and I am so glad. 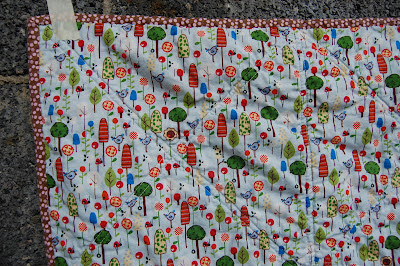 So there you have it. And in case you were wondering, here is my little pile from my shop hopping adventures. See how well I behaved myself?!?! 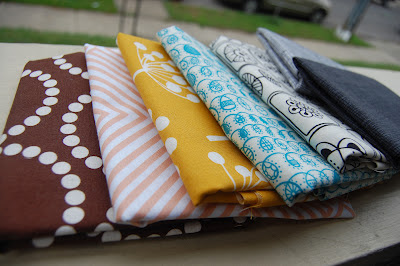 We stopped at 5 different shops (3 that were new to us), starting about 1.5 hours away and working our way towards home. It was so much fun and the sun even came out for the afternoon and we got to really enjoy the beautiful upstate NY fall. Good times all around. Now I need to settle in and start sewing. I have a lot of piles around here of things to make, mostly gifts, and I just want them done and out of my way, even if they are going to sit in a bag for the next 2.5 months. Now if I could just finish my socks so I can move on to another knitting project that would be great!
Posted by Cassie at 8:49 AM