I am happy to report that this christmas quilt is finished! It seemed like it was never going to happen since I started collecting fabric in October of 2009. But here it is, washed and dried and everything, and I love it! 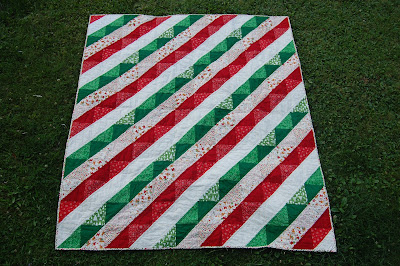 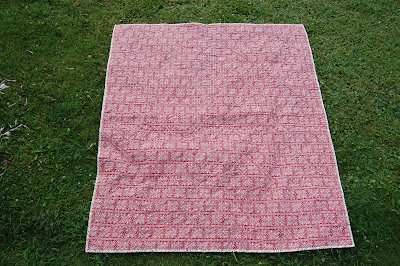 It started with the snowman and ornament fabrics that I just had to have and I figured I would decide what to do with them later. Just about a year later I had decided on a quilt and collected some more. I don't even know what most of it is, just things I liked at one of the LQS.

Anyway, I decided on HSTs and did half of them cream/green and half of them cream/red. Half are patterned, half are solids and I matched a print with a solid for each. I don't know why and really it made my design options more limited, but there you have it. Obviously, when I laid it out I decided on a stripe pattern which I think works really well although I do wish I had more variety in the red and green fabrics.

I didn't actually measure or trim my HSTs, I just started with 6" squares and as long as they were all the same size I figured it didn't matter. Pre-washing I believe it was roughly 61"x71" and it shrunk a few inches. I must say I am pretty proud of my trangles and the fact that they {almost} all have points. 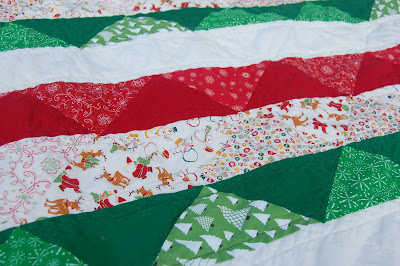 For the quilting I just followed the diagonals on either side. I did use red thread on the red, and green on the green and such which if you look close looks a little funny on the back, but I think it's fine, especially since the back is so busy. The back is a fabric from Connecting Threads that looks like fair isle knitting, and I wasn't sure if I'd like it, but it looks really cool. I thought about piecing a back, but I was feeling a bit lazy :) 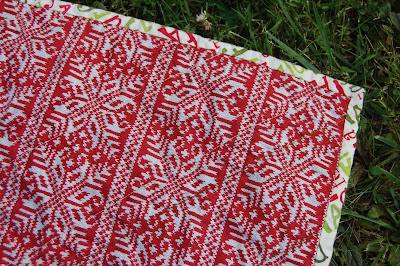 I think this quilt is destined to be a Christmas gift. Which I may give at thanksgiving so that it can be used for the Christmas season. I am generally against Christmas themed gifts for the holiday, but I think it will be okay for this. We'll see if it is well received.

Also, I started my farmers wife and I love it! I think I say that about everything, but it's always true :) I can't get enough, I have done 8 blocks already, I just need to get all the pictures together and labeled and all that. Maybe tomorrow! And even though I really just want to keep making farmers wife blocks (those little things are so stinking addictive!), I am going to work the next couple days to be caught up with the summer sampler and the skill builder sampler.
Posted by Cassie at 8:35 AM