It's finished! And I love it!

I finally got done sewing down the binding and can call this one done. I still have to wash it, but I decided it was best to get pictures while it wasn't raining since the forecast is pretty wet this week (although I was fighting some serious wind anyway). I don't really think the pictures do the bright wonderful colors justice though.

This quilt is made up of ikea fabrics that I found on sale at a LQS last year. After tossing many ideas around I decided that I would combine two ideas and do plus signs in the center and tumblers as a border and it worked out great! So that the mainly white fabrics wouldn't get lost in the background, I used some red and orange to make them stand out. I wasn't totally sure how it would work out at the time, but now I love it. 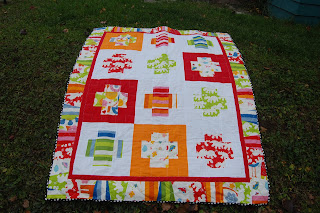 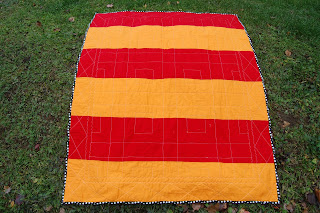 Part of the problem with the back was that I had wanted to find one of the large scale prints to use but I couldn't find it. So I settled on stripes out of the red and orange I used on the front.  The quilting was another issue I was stalled on. I was going to do some sort of FMQ but I couldn't decide and in the end I just went with some straight line quilting. I'm happy with it, but I kinda wish I'd tried something new. It's fairly small, measuring about 47x58 so it went pretty quickly. I actually did use the wavy stitch on my machine on either side of the small red border and it looks pretty cool. I am determined that I will try some organic wavy line quilting on a quilt sometime soon! The binding is an awesome black and white dot. It frames it wonderfully and really goes with the crazy fabric I think.  And that's about it I think.  Here is a close up of the back where you can really see the quilting more. 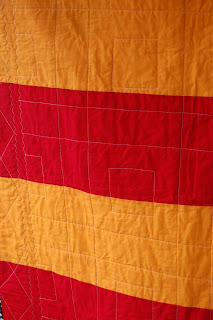 Now I have a stack of Echo calling to me, wishing to become a nice couch quilt. But who knows when I'll have time to get that going. So many ideas, so little time. I guess I should go clean/pack/bake/chase my toddler. See you Wednesday for the weekly round up!
Posted by Cassie at 9:12 AM